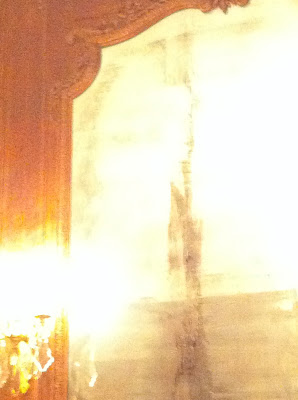 Gabriel looked down at his hands. They were gnarled and scarred. He began to mentally compare his hands to Nora’s but stopped himself. Not a living thing moved in this mammoth building, except for him. What these 10-foot mirrors must have witnessed throughout the years. He imagined certain ghosts lived behind the glass. Even when he watched Nora from across the street over the last year, the enormous mirrors—of which he could only make out the edges depending on his location at the park—spooked him.
Younger, he lumbered by here with his parents. His mother and father had always looked woefully at this building, his father near seething. His mother had never set foot in there. In fact, her only connection to the place was upkeep of people’s houses, those esteemed citizens who were welcome to frequent the Society’s establishment.
Gabriel turned up his collar and adjusted his slacks. It was still dark as he pressed his lean body against the heavy front door. He was exhausted from all night’s work. It wasn’t how he had imagined him and Nora finally meeting. Not at all. He clutched the heavy bag tighter and breathed in deeply as he stepped into the empty street and quickly transported his figure through Central Park. It was only a couple of miles to the river.
Gabriel, with teeth clenched, wove his way to the Hudson as the city woke up. A woman that reminded him both of his mother and Nora rang a buzzer on the porch of an apartment building. He shuddered when she scrutinized him head to toe and paused at his laces, which he now noticed were near untied. He shifted the bag to the other shoulder and laughed out loud at her until, embarrassed, she turned to the building’s face. He had used this tactic before. He was never going to be bullied by people, least of all by the ones who thought themselves better than him.
Gabriel arrived suddenly at river’s edge. He sat at the bench to gather himself, wanting to ensure no one would ask questions or pay attention to him tossing the bag in the water. Just as he suspected—he had found his father many times at this very spot—there was no one. He pitched Nora’s superiority and alarm into the Hudson and studied the bag as it sunk like a rearing, brass, warhorse sculpture.
Gabriel tripped over a small patch of grass into which he had accidentally wandered and returned his soles to the sidewalk. When Gabriel reached Penn Station, he veered drastically into the light. The sun is violently hidden, he thought, the dark sky tears it apart. Gabriel looked back down and scanned the station.  Dizzy, the rise of the windows gave him the same kind of feeling his father’s facial expression had exhibited many years ago when perched at great heights. Gabriel carried himself back to the street.
The shoe shiner was a welcome apparition, tucked next to the building. The boy moved quickly around an elderly gentleman’s expensive shoes. His hands, Gabriel examined more closely, were smudged black and brown. The shoe shiner peered up at Gabriel and then inspected the lower quality, splattered lace-ups Gabriel wore. He stared at Gabriel intently, his eyes obviously well versed in a spectrum of questionable activity on the city’s streets. Gabriel stuck his hands deeper in his pockets and glared back unrelenting at the shoe shiner. The shoe shiner looked away.
Penn Station, the towering edifice, made the boy’s face appear like the visage of a menacing leprechaun. Gabriel remained rooted. There was some connection to this boy, some moment of recognition they shared. It made Gabriel feel less lonely, though Gabriel didn’t articulate it to himself that way. Rather he meditated on what he’d do with the remainder of his day. When the wealthy old man sauntered off, Gabriel thought he saw Nora’s reflection in the man’s eyes. The man’s shoes were bright and practically brand new. Gabriel brought his coat in closer and arched one leg, setting it down on the cube-like box before him. Gabriel stood absolutely still. He felt his muscles untangle like clothes drying on a long line stretched above the city. The boy mumbled a “How are you sir,” and Gabriel, already relieved, ignored him.
Gabriel summoned memories, like playing Swing the Statue with the neighboring children. They always picked the boy upstairs to swing, and Gabriel was always chosen to be swung first. The older boy would take the children, hold them by a wrist or hand, swing them in a circle and then let them go. Gabriel, spinning or tumbling, would freeze. He was smallest but also able to hold strange positions for the longest period of time. Gabriel was a patient boy. He could wait and wait.
Gabriel watched the abhorrent city cacophony begin. Cars blasted their horns incessantly; it gave him a headache. The passers-by, with Madison Avenue wardrobe, fixed their haunted gazes ahead as their heels clicked by. Those less fortunate walked with heads hung low. As the shoe-shine boy wore away the blood stains on the shoes, Gabriel measured tomorrow’s transportation options.
The shoe-shiner hovered above Gabriel’s toes. Just as Gabriel solidified plans to take a Cleveland-bound bus the next day, he noticed another man taking a photograph. These tourists. The city—he ached to seize that camera. Gabriel focused on movement to his right. Backs of cars rode away seemingly in slow motion. Left, the photographer, like someone frozen, remained nearby staring up at the station.
Gabriel regarded the entire view and contemplated the seagull party hovering near the building’s edge above him. His mother used to say the seagull flies between earth and heaven with messages to mortals. Acknowledging her prescience, Gabriel nodded the birds’ direction. Gabriel handed the shoe-shiner money, surprised when the bills rested in the recipient’s hand. Looking down, the boy’s palm looked translucent, unworldly or invisible—as if anything solid could slip through.